In a previous blog post on this topic, we introduced the acoustic radiation force as a possible mechanism in lab-on-a-chip devices to handle micro-particles or biological cells. Application areas range from acoustic levitation, sorting (both industrial and biomedical) to patterning of cell cultures for tissue engineering.

What to do next?

To aid a simple discussion, previously simplified simulation models were investigated with idealized boundary conditions and loads. The acoustic field itself was also of a quasi-static nature, in this blog post we expand on these two ideas: let’s look at fields other than pure standing waves and investigate more realistic devices with piezoelectric excitation!

Previously the excitation function of the source(s) was a sinusoid, such as p = p0*sin(2ky – ?), where the phase was a constant in time. However, we could have a time dependent phase modulation to achieve more interesting pressure and therefore acoustic radiation force distributions. To have a basic case to start with, let’s assume that the phase modulation is linear with time, and quite slow, meaning that the phase change rate is orders of magnitude smaller than the drive frequency.

An equivalent behavior is seen if the two transducers have slightly different drive frequencies, in this case the standing wave pattern moves away from the higher frequency source (Ref 2). As this latter case is more straightforward to implement, let’s look at this!

The simulation model was the same water domain with impedance matched source planes as before. Now the top source plane is excited using a 2 MHz pressure source, while the bottom plane using 2.1 MHz. Note that in real applications the frequency difference is in the order of Hz for MHz signals – our test case was designed to reduce the simulation time with only a 5% frequency difference.

A video illustrates the phenomenon well:

Initially the center and top bottom surfaces are all acoustic pressure antinodes (red/blue maximum pressure variation), that by the end of the video turn slowly into pressure nodes (green, approximately zero pressure amplitude).

The acoustic radiation force can be obtained numerically the same way as before. Here as the frequency is different for the two sources, it is not obvious what period to choose for the averaging, which gives some variations, but for real cases is negligible. Simple calculations show that theoretically the acoustic radiation force follows F = F0*sin(2ky – ?ft), where ?f is the frequency difference between transducers, now 0.1 MHz.

A spatiotemporal plot in this case reveals a more complex distribution: 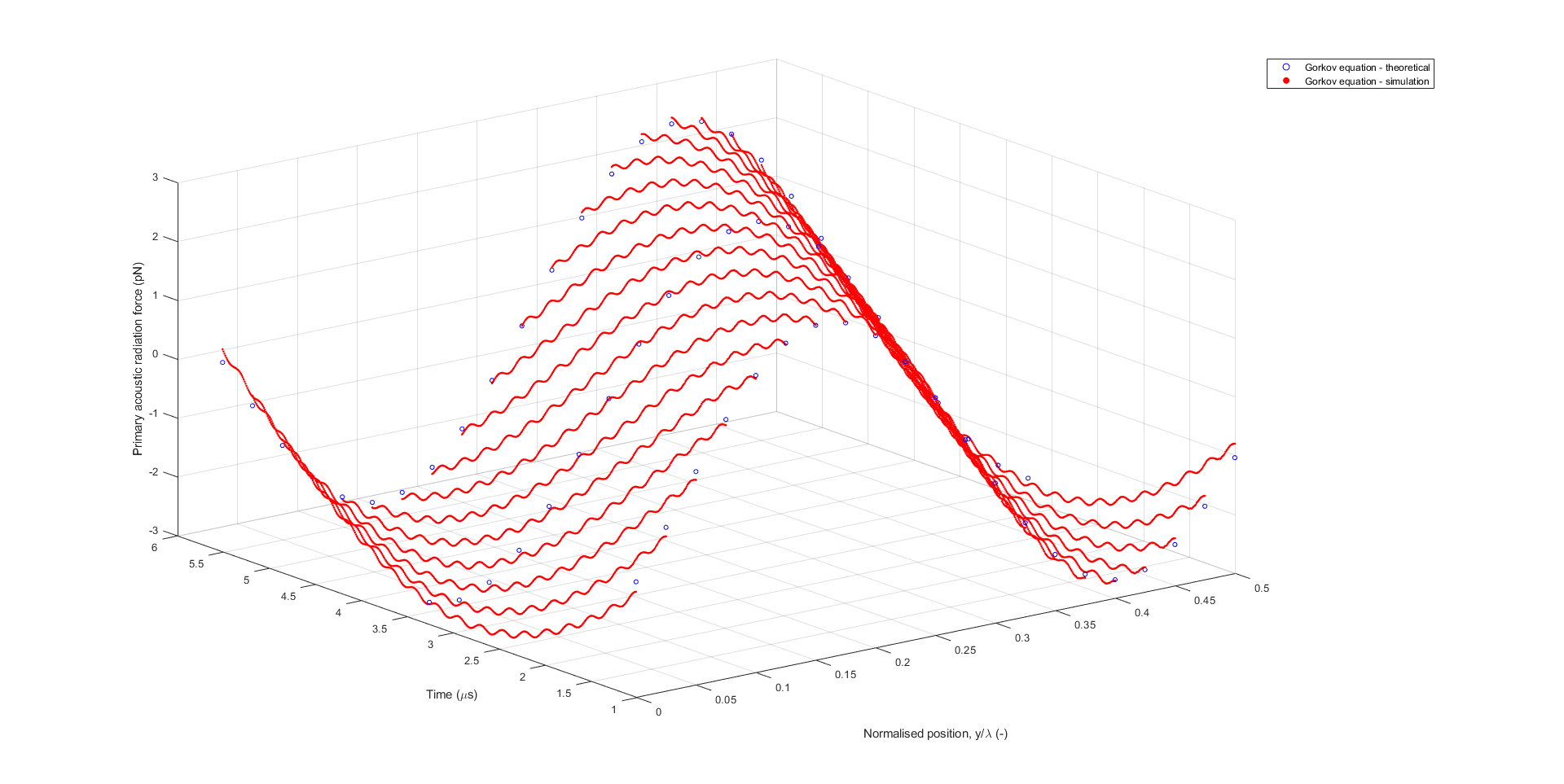 It is obvious that the acoustic radiation force distribution keeps its sinusoidal shape with time but shifts in space. The small variations come from the averaging and the interference of the two slightly different frequency signals. As stated before, in realistic applications this is not an issue due to the minuscule frequency difference. 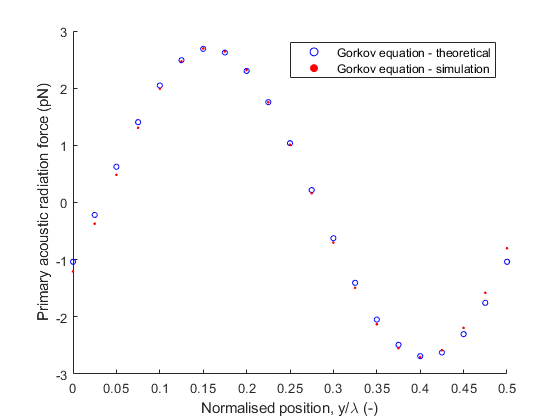 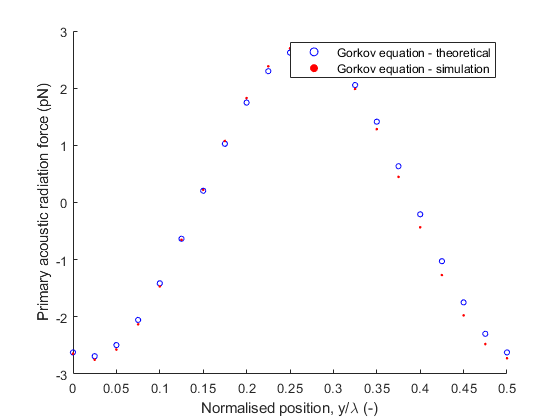 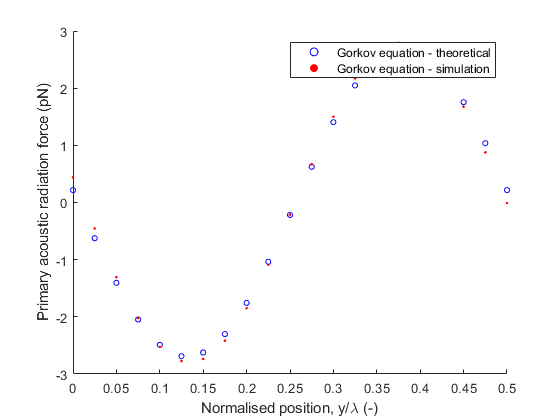 Proper adjustment of drive and translational frequencies to microparticle size and physical properties can selectively displace a targeted group from a heterogeneous mixture, as discussed in the references.

A commonly used piezoelectric material is PZT (lead-zirconate-titanate), due to its versatility and ease of handling. It is also widely used for acoustic-microfluidic applications. The source plane can directly be replaced by a block of the piezoelectric material, and the excitation function applied as potential difference between the top and bottom surfaces. The top model boundary is impedance matched to a similar PZT material, mimicking an opposing transducer and introducing hard reflections due to the impedance mismatch between water and PZT.

This results in a slightly longer time to reach equilibrium, that is guided by the material losses and quality factor. In our case, for the Q=90 PZT, approximately double number of cycles (~200, 100 ?s) are required for the transient processes to die out and reach a steady state, as shown on the following plot of the acoustic pressure at a fixed location within the cavity: 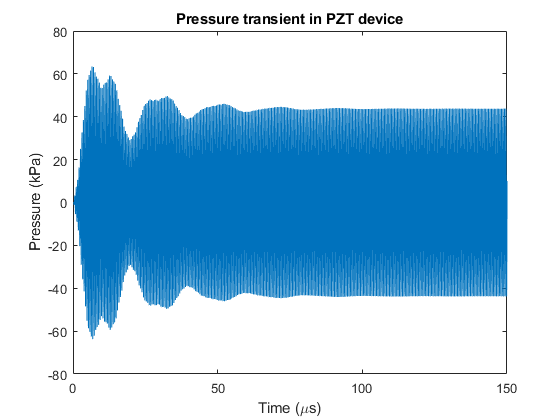 The video of the acoustic field strength clearly shows that (i) the direct coupling between PZT and water is relatively poor (larger signal strength inside the PZT material compared to water) and (ii) the longer settling time to reach a standing wave behavior:

Afterwards, the spatial-temporal distribution of the acoustic radiation force can be plotted to reveal the expected time-invariant, standing wave distribution: 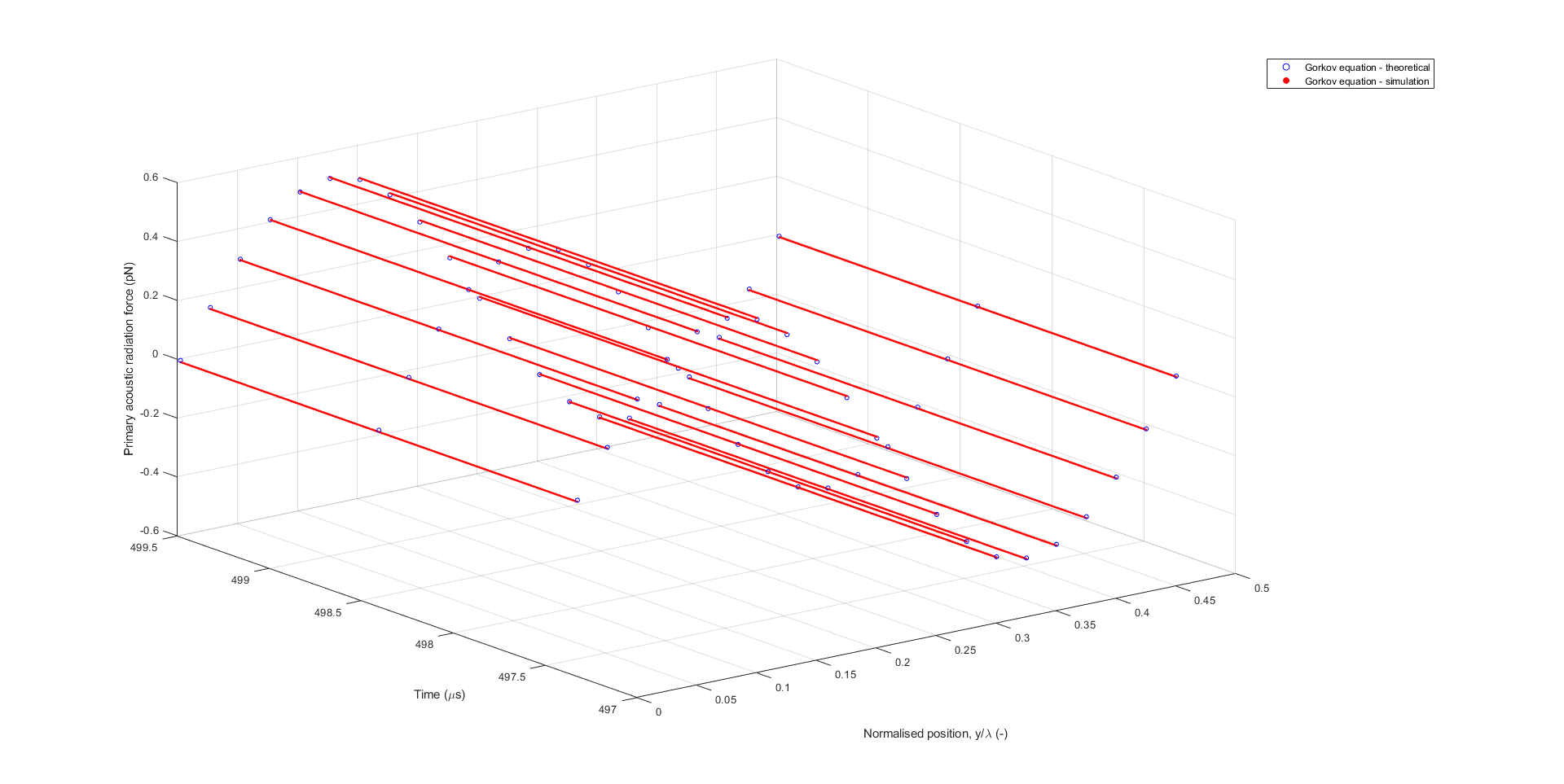 In this blog post, we reviewed more complex modelling of acoustic radiation force. Download OnScale and get in touch today to start your journey in acoustic modelling! 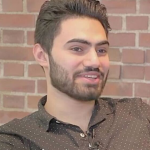