Using the appropriate elastic material properties for your simulations is of utmost importance to generate meaningful and accurate results. However, these come in many forms, such as elastic moduli, stiffness or compliance matrices, velocities within materials. It can be time consuming and daunting to convert these into the appropriate format.

In the following discussion, engineering strains are assumed, i.e. the shear strains are the ‘gammas’, rather than the ‘epsilons’. In Voigt notation:

The stresses do not exhibit this issue – they are always defined the same way.

For a more detailed discussion on how the symmetric second order stress and strain tensors reduce to 6 elements each, see: https://en.wikipedia.org/wiki/Voigt_notation

Note: Internally, OnScale uses non-engineering strains, so if the user looks at the ‘matp’ property array, the lower diagonal values seem doubled. Disregard this, and always refer to the print file that has accurate information on the properties assuming engineering strains.

In general, the correspondence between the stresses and strains can be described using a 6-by-6 matrix, that is the equivalent of the fourth order stiffness or compliance tensor.

Bear in mind that the tensor values are different to the contracted matrix values (multipliers of 2 and 4 appear), see pp. 65-66 from B.A. Auld: Acoustic fields and waves in solids or the relevant section of Wikipedia. Usually this does not cause an issue as the real tensor values are not touched at all.

and the compliance matrix:

are matrix inverses of each other.

These are diagonally symmetric due to the major and minor symmetries of the tensors, so the upper triangular matrix is sufficient to fully describe them. Only 21 independent material parameters are needed.

How to specify an anisotropic material in OnScale?

where (option) is either stif (can be omitted) or cmpl for compliance. The values cIJ are the matrix values. 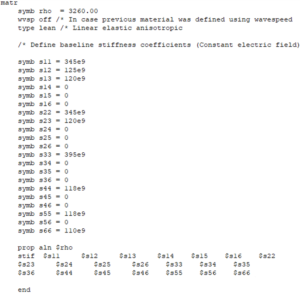 (Clearly the numerical values could be used directly instead of defining variables but gives a more transparent code.)

In general, any crystalline piezoelectric material is anisotropic without too many simplifications possible, e.g. quartz. Or SAW wafers (LiTa, LiNbO3 etc) are especially anisotropic due to the rotated cut angles they exhibit. Deposited or poled piezo materials can be a different story (see below).

A special case of anisotropy, at every point within the material there are three mutually perpendicular symmetry planes. If we align the symmetry planes with the coordinate axis, the material property matrix has to simplify to be invariant under these conditions, zeroing out many elements:

The inverse matrix (the compliance matrix) can be written in a way that is common for isotropic materials, using Young’s and shear moduli and Poisson’s ratios: 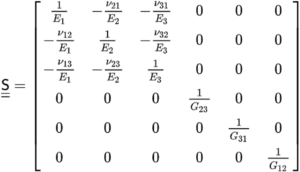 (Note that due to the location of the zeros in the matrix, the bottom right diagonal elements are simple numerical inverses of the relevant stiffness values, and the 3-by-3 top left submatrices are matrix inverses of each other.)

Very important that in general the nuIJ and nuJI Poisson ratios are NOT equal! However, due to matrix symmetry, the mirror elements have to be equal, and result in further constraints, such as:

That implies there are only 9 independent material properties: three Young’s moduli, three shear moduli and three Poisson’s ratios. Furthermore, the larger of nuIJ and nuJI is generally called the major Poisson ratio, while the smaller the minor Poisson ratio.

How to specify an orthotropic material in OnScale?

There is no dedicated command, just use the method described at the anisotropic section with a bunch of zeroes.

However, it is important to understand how to convert to these properties if three Young’s moduli, three shear moduli and three Poisson’s ratios are given. First, if major and minor Poisson’s ratios are given, figure out the specific nuIJ and nuJI values. For example, if Ex > Ey and the major Poisson’s ratio in XY is given, then this must be the nuxy one to make the above equation hold. The other can be obtained on rearranging: nuyx = nuxy*Ey/Ex. Afterwards all information is available to assemble S and if needed its matrix inverse provides C.

Common examples of this group are wood and sheet metal.

A special case of orthotropy. In transversely isotropic materials there is a symmetry plane in which the material properties are orientation independent. This reduces the number of independent variables. Let’s assume now this plane to be XY. Clearly the in-plane Young’s modulus is invariant, so Ex = Ey. From this and the nuyx/Ey = nuxy/Ex equation from above: nuxy = nuyx. Any other property, where x and y can be exchanged are equal (e.g. Gyz and Gxz, these must be equal as x and y are interchangeable, or nuxz = nuyz for the same reason). Finally, there is an additional constraint on the xy shear:

Which means, there are 5 independent constants, either:

How to specify a transverse isotropic material in OnScale?

As before, you can use the anisotropic material command.

However, there is a specific command as well for transverse isotropic materials.

Activate using matr-type leti (Linear elastic transverse isotropic) and then use the form:

where E is the in-plane, E’ the out-of-plane Young’s modulus, v and v’ the similar Poisson’s ratios and G’ the out-of-plane shear modulus. The normal vector for the symmetry surface is given by n1 n2 n3. For example, the same aluminium nitride that was shown before is a transverse isotropic material with XY symmetry plane (normal vector 0 0 1), and therefore can also be given as:

We will let the reader verify that this would result in the same aluminium nitride definition as given by the stiffness matrix.

The materials within this group are quite diverse:

This case can be viewed as a special case of the transverse isotropy by adding another constraint for the perpendicular direction. Consequently, all the Young’s and shear moduli, Poisson ratios simplify to single numbers (and only two of these are independent).

How to specify an isotropic material in OnScale?

An example for steel with assumed properties:

Important note:  The command requires the bulk modulus, rather than the Young’s modulus. Useful conversion tables are at https://en.wikipedia.org/wiki/Elastic_modulus.

Instead of bulk and shear moduli, dilatational and shear wave speeds can be used for isotropic materials as well. This is useful for fluids, where no shear waves are supported, and elastic moduli do not have meaningful values.

The shear wave speed is simply defined by:

while the dilatational wave speed is defined by:

So for the above example of steel:

And the alternative version of the command is:

For water at usual conditions, the same command would look like: 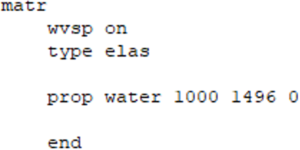 In this blog post we reviewed some of the most common elastic material groups, such as anisotropic, orthotropic, transverse isotropic and isotropic. For each case gave example OnScale code how to specify these to the solver. Example materials help the reader appreciate the differences between these material groups.