Included is an example of how to use OnScale to calculate thermal effects in tissue from focused ultrasound, both pulsed and continuous wave. The loads are applied as mechanical pressure using the plod command. This example uses multiple sources with variable time shifts to focus the beam to a given location. The device is fired in two different modes as this alters the method of calculating thermal response. Appropriate thermal simulations then calculate the heating in the tissue under given drive conditions and pulse repetition rate.

OnScale is commonly used for the simulation of high-intensity focused ultrasound (HIFU). With HIFU, ultrasound is focused to a point either by mechanical focusing (a bowl-shaped device) or by electrical steering (a phased array). Mechanical attenuation in the propagating medium causes energy from the ultrasound wave to be lost as heat. The large pressure at the focal region, however, results in the largest temperature rise at that location. Selectively directing the focus to regions of unwanted tissue allows it to destroy solid tumors. 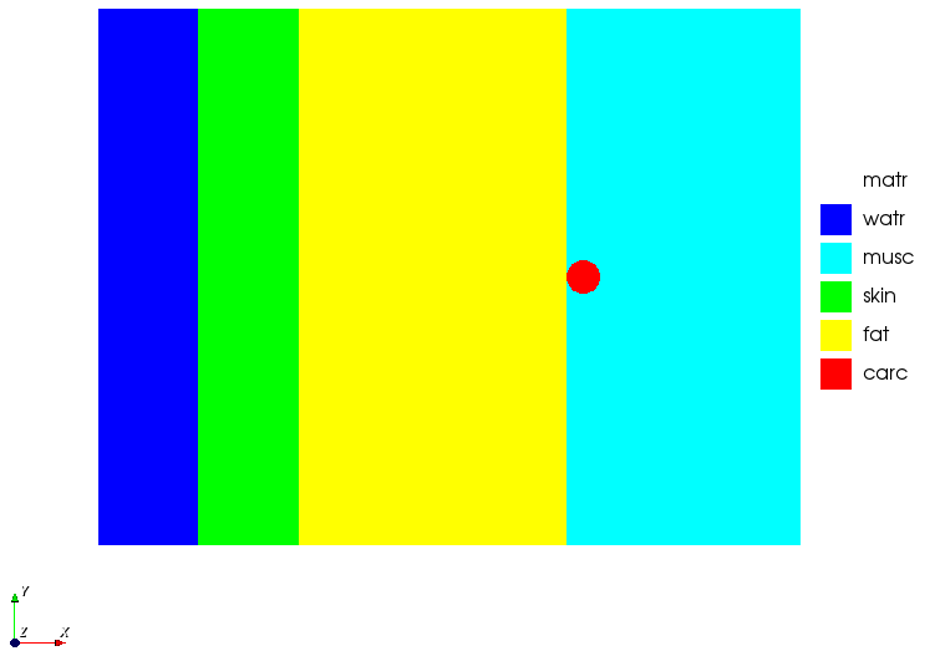 There are two ways to drive the mechanical model, pulsed and continuous wave. With the pulsed model, a short broadband pulse of ultrasound is transmitted, and the model is run until all the significant waves have exited the model. Data is gathered for loss (energy deposition) over the entire simulation. With the CW model, the model is run with a continuous sinusoidal drive of a given frequency until the system reaches steady state, i.e. all the cycles are identical. Energy-loss data for the CW model is gathered over a single cycle only after the system has reached steady state. Examples of both pulsed and CW operations are provided.

It is imperative that the attenuation parameters of the materials be accurate to ensure accurate calculation of the energy loss in each material. OnScale has highly versatile damping models that allow not only for separation of the shear and longitudinal damping, but for frequency dependence of the damping. The load in the initial mechanical simulation (i.e. the acoustic wave propagation model) uses several pressure surfaces, each driven at a slightly different time to focus the ultrasound to a point. The wave begins propagating from the edge of the source, moving toward the center. This example uses Symbol logic loops to apply a pressure load (plod) to each pressure surface. The size of the surfaces should be small relative to the signal wavelength so that the pressure source more closely represents a point source. 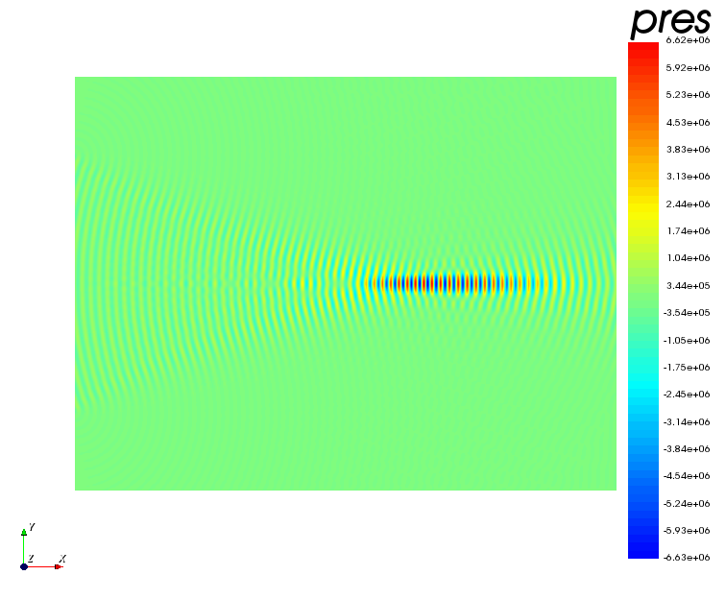 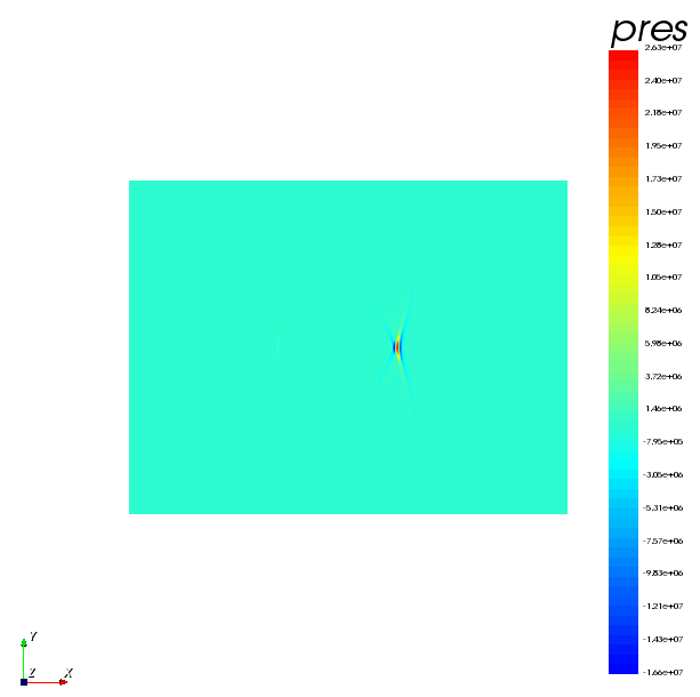 The simulation is run for a period. Note that for a CW model this is until steady state (approximately 75 cycles, in this case) and for a pulsed model until the wave exits the model. Fig. 2 shows the model when it has reached steady state under CW excitation. Fig. 3 shows the pulse propagating toward the target. Once the pulse has passed, the pulsed model finishes, saving the loss array for use as the input function for the thermal model. The CW model requires an additional step. Using the set loss 0 command, reset the loss array, deleting all energy loss calculated up to that point. Then run the model for a single cycle the exec cycl command uses the frequency in func to determine the cycle period). The energy deposited over a single cycle is calculated and stored in loss.

Unlike with most acoustic simulations, in OnScale you must specify a time step with the time command. As this is a thermal simulation, there are no wavespeeds with which to set the appropriate time step. Using even the true material velocities would result in a time step suited to a microseconds-long acoustical simulation rather than a seconds-long thermal one. Fortunately, the implicit thermal solution is unconditionally stable; that is, the model will be stable and run to completion no matter what time step is specified. You must, however, specify a time step that is small enough to capture the temperature variation over time anywhere in the model. Finally, unlike with acoustic models, with thermal models the base settings must be determined—in this case, the starting temperature. Use the set tmpr command to set the temperature to 37°C, the average body temperature. This must be done after the prcs step. 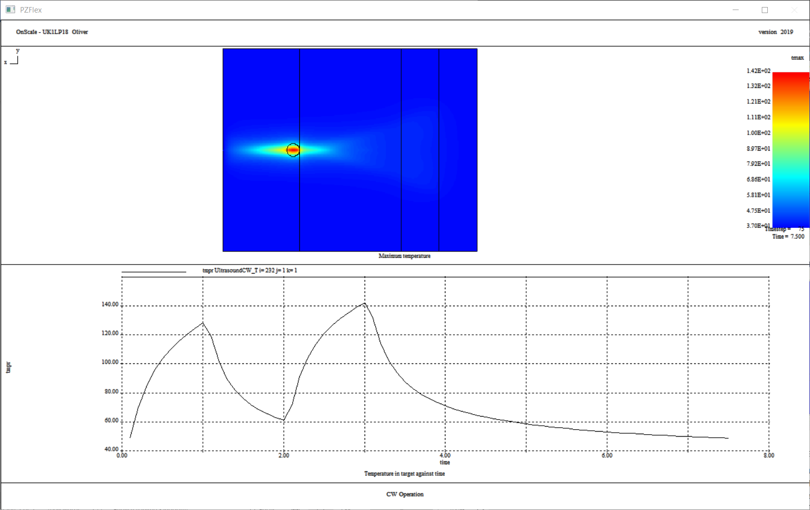 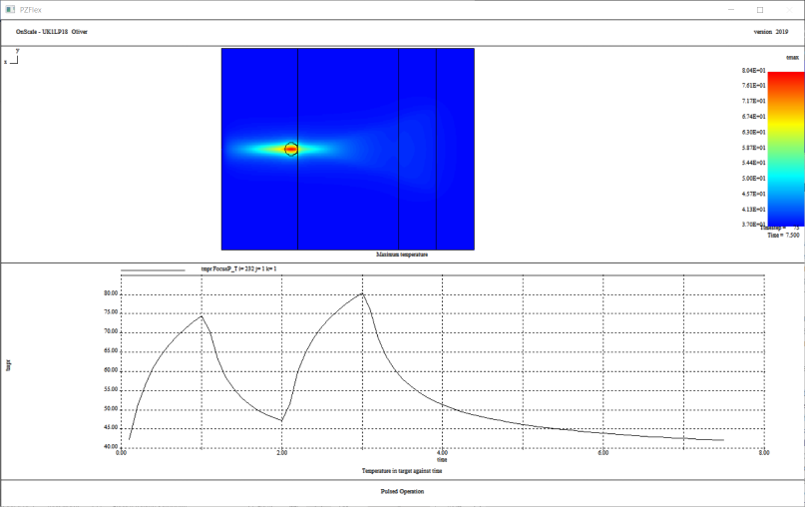 Examine both the maximum temperatures in the model and the temperature against time at the focus in Fig.4 or 5. Note the rise during the drive period, with rapid cooling during the off phase. The temperature does not manage, however, to recover to the base 37°C by the time of the second pulse, resulting in a higher temperature peak.

The thermal example shows how to determine heat losses created in a piezoelectric model by splitting the mechanical and thermal simulations into two sections. First you model the acoustic wave interactions in the model and then you use the resulting acoustic loss data to model the thermal source in the tissue. The decoupling of the two models allows for efficient modeling, as they occur on vastly different time scales. The example also shows how to calculate the pressure maximum (pmax) developed in the model.