If you have ever wondered why the temperature of your shower is so cold at the beginning and takes 1 min to get to body temperature, you know already what a Thermo-fluid problem is!

Said simple, thermo-fluid simulation is the simulation of the changes of temperature with a fluid.

It’s a coupling of 2 types of Physics: Fluid Simulation and Thermal Simulation

Fluid physics (also called CFD like Computational Fluid Dynamics) simulates the velocity and pressure of a chosen fluid and thermal physics simulates the heating and cooling of the fluid and its changes of temperature.

When do you use Thermo-Fluid Simulation?

Imagine a system in which uses a fluid as a medium to transport heat and you want to understand exactly how the heat is getting spread into the system.

A good example of that is a heat exchanger. 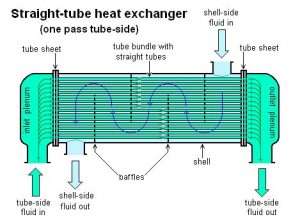 This is exactly the type of system that can be modelled with thermo-fluid simulation, but this is only one example of what can be solved using Thermo-Fluid Simulation.

Some examples of Thermo-Fluid Simulation

There are MANY systems which would justify the usage of thermo-fluid simulation.

In Electronic Cooling for example, engineers are trying to understand how fast a board with electronic components can be cooled down using fans and adding heat sinks for example.

In a Heating, Ventilation, and Air Conditioning (HVAC) simulation, engineers want to see the flow of air within a building or a room and understand where the the room is heated up the most and how to cool it down more efficiently.

When you are interested into understanding the movement of heat, you might want to know either the temperature inside a mechanical system and its impact on the system (because temperature causes thermal stress and deforms the system), this is called Thermo-Structural simulation.

In this case, temperature around the system is generally steady and constant and the real point of interest is the mechanical system itself and the impact of temperature on it.

You might also want to know how temperature around a system behaves and how the temperature is provided to the system. That’s when you use Thermo-Fluid simulation.

There is a 3rd type of simulation called Conjugate Heat Transfer (CHT) which is needed when you want to simulate thermo-fluid, but you also want to see the distribution of temperature within the structural system. This is a capability that will soon be available in OnScale Solve as well.

All type of simulations (not only thermo-fluid) can be either transient or steady-state.

In simple words, transient means time-dependent and steady-state is the state of the system at equilibrium (after a very long time has passed).

Of course, you have also some systems which are only transient because the temperature or the heat applied to it is always changing and depending on time. 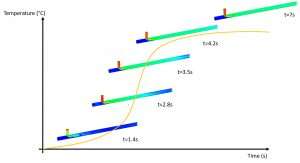 OnScale Solve uses a transient CFD simulation solver based on the LBM (Lattice Boltzmann) Method which makes the simulation of both transient and steady state possible. It’s up to you to understand how long you want to simulate your thermo-fluid system and go forward with the simulation!

To demonstrate all the principles that I have talked about in this article, we will simulate together an electronic cooling problem.

The full tutorial is available here, so we will make it a bit simpler in this blog post. 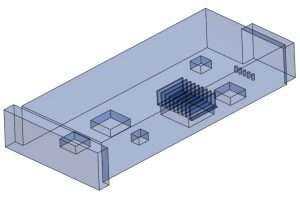 Once you have done that, import it into OnScale Solve and choose your fluid material. Make sure your fluid material coefficients are correctly setup as this is crucial to get a correct distribution of heat! Double check also the units, this is an important step.

Next step is to set-up the boundary conditions. In other words, how velocity, pressure, temperature and heat flux are applied to your model in real life. 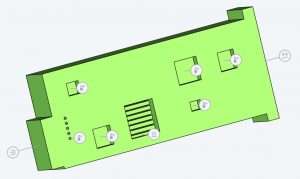 After the boundary conditions, you have a few parameters that are extremely important for the success of your simulation which are “hidden“ in the Fluid and Thermal Environments… make sure you review and change those appropriately! 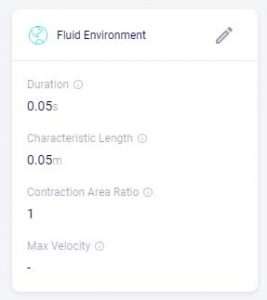 Once all of this is setup, have a quick look at the mesh size to be sure it is coarse enough for a quick first simulation, but small enough to still represent well enough small details in your system. I always recommend to choose a coarse mesh first to obtain the results quickly and evaluate roughly the accuracy of those. After that, you can refine the mesh to get better and more accurate results (Click on Advanced Mesh Settings to display Mesh Size) 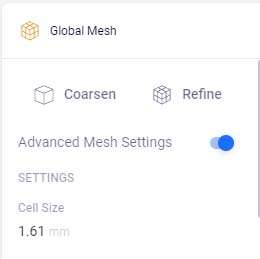 Now, launch your simulation on the cloud, accelerate it if needed and wait to get the results.

Review your results and iterate your simulation design until you get something which is reasonable and provides to you the insights you need. 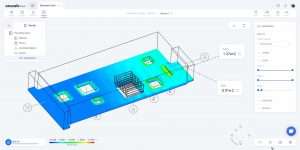 Improve your design and get to the next level with OnScale Solve!