“By using OnScale powered by AWS HPC, our team was able to develop comprehensive models for Optical Coherence Elastography”.
Dr. Ivan Pelivanov, Associate Professor, Department of Bioengineering at the University of Washington

In human physiology, it is often said that function follows form. The human eye is no exception to this rule. Indeed, the eye’s ability to collect and transfer visual information to the brain is intrinsically linked to its form – what biomedical engineers call “biomechanics”. Subtle changes in ocular biomechanics can greatly affect visual function, and ophthalmologists can measure these changes to diagnose disease or monitor the effects of treatments. 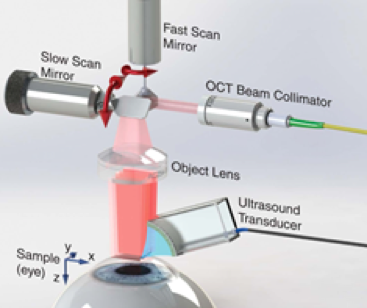 “We are developing a novel and truly non-contact OCE system to measure elasticity changes in the eye with micron resolution. It’s a high-risk, high-reward product development effort.”
Dr. Ivan Pelivanov

Their goal is to develop a medical device that detects changes in corneal elasticity and intraocular pressure, allowing doctors identify ocular diseases earlier and monitor the efficacy of therapeutic interventions. This work can then be extended to allow probing of other organs (such as skin) to treat skin burn victims, evaluate the aging process and monitor skin diseases. Such a device has the potential to greatly improve patient care by providing doctors and clinicians with the quantitative information they need to guide and optimize treatments.

Elasticity imaging requires a physical deformation of the tissue and a method to track the mechanical waves produced by that deformation. The University of Washington group uses a technique called acoustic microtapping (AμT) to generate broadband mechanical waves in the cornea at a frequency imperceptible to human nerve-endings (i.e. painless).

Like an audio speaker, an air-coupled ultrasonic transducer creates a pressure wave that travels through the air to the corneal surface (completely non-contact, in the traditional sense) which creates a surface acoustic wave on the corneal surface. Using optical coherence tomography (OCT), the propagation of this wave can be measured and its behavior can be used to spatially map mechanical properties such as shear wave speed, shear modulus, and elastic modulus – elasticity of the cornea.

O’Donnell and Wang’s team uses OnScale to explore the excitation and propagation of shear waves in simulated models of biological tissues. In particular, the geometric and material complexities of the cornea create unique challenges for reconstructing elastic modulus from the mechanical wave behavior. The results of the team’s research are used to help better understand these challenges and to develop fundamentally new approaches to dynamic elastography.

To model elastic wave propagation in soft tissue, the team used OnScale to construct a two-dimensional finite element model that closely mirrors their experimental OCE system. Modeling elastic waves in soft tissue can be particularly challenging, as they are typically described as nearly-incompressible (Poisson’s ratio ? ? 0.499995). The University of Washington team extensively tested their OnScale model to ensure that their solutions were not corrupted by hourglass modes, numerical dissipation, or numerical dispersion – all common errors that can arise in many commercially-available software packages.

“This “stress-testing” has paid off, and the team obtained an extremely reliable numerical model with which they can rapidly test new ideas, explore elastic wave physics, and validate experimental results.”
Dr. Ivan Pelivanov

In a recent publication, “Does group velocity always reflect elastic modulus in shear wave elastography?”1, the team used OnScale to examine the effects of tissue boundaries and elastic wave bandwidth on OCE images. In many OCE studies, the group velocity of the elastic wave is used as a surrogate measurement for bulk shear wave speed.

In thick-slab materials, this can be an accurate approximation. However, this is not true in the cornea, which can be described more accurately as a thin plate bounded on one side by air and on the other by water. This leads to a more complex wave field containing dispersive guided wave modes. As a result, group velocity estimates do not produce accurate images of the bulk shear wave speed. 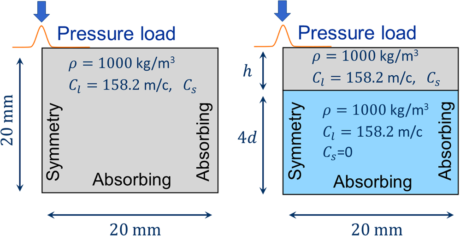 Finite element model in OnScale (formally PZFlex): (a) geometry and boundary conditions for a nearly incompressible semi-infinite medium and (b) a layer bounded on its bottom with water.

The University of Washington team was able to demonstrate that when group velocity is used to quantify elasticity, the accuracy is directly limited by the bandwidth of the mechanical wave.

The bounded tissue model used in this study consisted of two layers of linear elastic materials. The top layer, which modeled the cornea, was a nearly-incompressible (? ? 0.4995) solid with thickness h = 0.5 mm and shear wave speed CS = 3.8 m/s. The bottom layer modeled a bounding water domain, with a matched longitudinal wave speed and a shear wave speed of CS = 0 m/s. Elastic waves were excited by a spatio-temporally sharp pressure, or “push”, applied to the top boundary of the domain. The spatial push profile was Gaussian, while the temporal push profile was super-Gaussian. Both profiles were chosen to closely match the experimental push profiles created by the acoustic microtapping transducer, with a spatial width of 500 ?m and a temporal duration of 100 ?s.

For the study’s OCE experiments, the team constructed a 0.5 mm thick tissue-mimicking phantom with a bulk shear wave speed of CS = 3.8 m/s. They then suspended a thin layer above a water bath to mimic the boundaries of the cornea. The acoustic microtapping transducer was positioned with its focus at the phantom surface, angled so as not to obstruct the OCT imaging beam. For each experiment, the transducer produced a 500 ?m wide spatially-Gaussian push for a duration of 100 ?s. A high-speed phase-sensitive OCT system was used to measure the velocity field produced by the elastic wave as it propagated through the phantom. To test the effect of limited signal bandwidth, the OCE velocity signals were filtered with varying cutoff frequencies. A group velocity estimation algorithm was then applied to the signals to produce elasticity images. 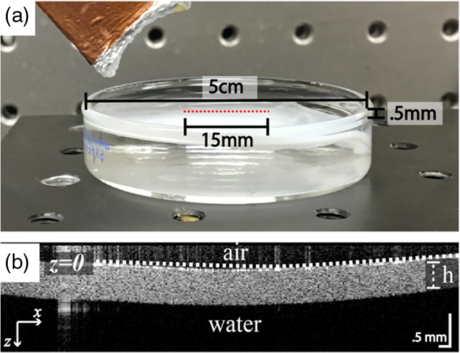 This result is important because the bandwidth of the elastic wave is intrinsically linked to the excitation method used to generate it. Air-puff excitation, a commonly-used alternative to acoustic microtapping, generates signals with bandwidths up to 400 Hz. This fundamentally limits the potential accuracy of these OCE elasticity estimates. In contrast, acoustic microtapping is capable of producing mechanical waves with frequency components up to 8 kHz, allowing it to more accurately probe tissue mechanical properties compared to other methods. Even so, these results point to the need for more advanced methods of elasticity reconstruction that are not as susceptible to geometric dispersion.

O’Donnell and Wang’s group continues to use their OnScale simulation to develop new methods that can overcome these challenges and help advance OCE toward clinical adoption.

Numerical solutions (A) computed with OnScale and filtered to the experimental bandwidth accurately capture the guided wave modes observed in experimental OCE measurements of thin-layered tissue mimicking phantoms (B), allowing OnScale to function as a “virtual workbench” for exploring new techniques to measure tissue elasticity. The accuracy of the OnScale solver in resolving the complicated guided wave field is beautifully illustrated by comparing the computed wavefield’s dispersive behavior to the theoretical solution (C).

Numerical solutions (A) computed with OnScale and filtered to the experimental bandwidth accurately capture the guided wave modes observed in experimental OCE measurements of thin-layered tissuemimicking phantoms (B), allowing OnScale to function as a “virtual workbench” for exploring new techniques to measure tissue elasticity. The accuracy of the OnScale solver in resolving the complicated guided wave field is beautifully illustrated by comparing the computed wavefield’s dispersive behavior to the theoretical solution (C).